As someone interested in geography (and pretty pictures), I used to be on a mailing list run by NASA which showcased the most stunning and intensely thought-provoking satellite images of natural phenomena. One of the images and accompanying stories that has stayed with me since I first saw it years ago was of a region in Chad called the Bodélé Depression.

Although visually striking, what really captivated me was the mechanism behind the combination of wind and earth that is this natural conveyor belt, located at the southern edge of the Sahara, at the lowest point in Chad in central Africa. To quote from Wikipedia:

“Dust storms from the Bodélé Depression occur on average about 100 days per year … [a]s the wind sweeps between the Tibesti and the Ennedi Mountains in Northern Chad, it is channeled across the depression. The dry bowl that forms the depression is marked by a series of ephemeral lakes, many of which were last filled during wetter periods of the Holocene. Diatoms from these fresh water lakes, once part of Mega-Lake Chad, now make up the surface of the depression and are the source material for the dust, which, carried across the Atlantic Ocean, is an important source of nutrient minerals for the Amazon rainforest.”

This last sentence is the frankly rather unbelievable key to the story, and deserves closer scrutiny. In work published in 2006 (and subsequent reports), it was shown that

“…about half of the annual dust supply to the Amazon basin is emitted from a single source: the Bodélé depression located northeast of Lake Chad, approximately 0.5% of the size of the Amazon or 0.2% of the Sahara. Placed in a narrow path between two mountain chains that direct and accelerate the surface winds over the depression, the Bodélé emits dust on 40% of the winter days, averaging more than 0.7 million tons of dust per day. … About 40 million tons of dust are transported annually from the Sahara to the Amazon basin. Saharan dust has been proposed to be the main mineral source that fertilizes the Amazon basin, generating a dependence of the health and productivity of the rain forest on dust supply from the Sahara.” 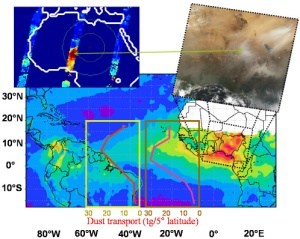 As an analogy for what a single person or small group of individuals can do in the new era of digital media, this natural phenomenon seems to me to be unsurpassed.